What Are Headstones Made Out Of?

Headstones can be made of a variety of materials. Granite headstones are the most common today but marble, fieldstone and bronze are often used as well. Current cemetery regulations may limit the type of material allowed today, though in times past, different types of metal or wood were a possibility. 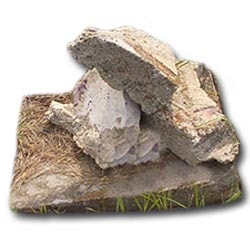 Before the organization of modern cemeteries, people would bury their loved ones wherever they saw fit. Usually on their own land or near where they had died. Most of the graves went unmarked but occasionally large stones, carved wood, or a stack of personal belongings could be used to show the burial place. The few that had inscriptions only included a name and possibly a date. Some believed that by placing a heavy stone over the grave it would keep the dead from rising out of the grave. These materials are still used today as decorations and sentimental pieces but are not normally used as permanent memorials. Some extremely large field stones may be sandblasted and used as a headstone depending on current cemetery regulations. 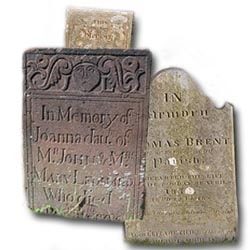 Sandstone & Slate
In the 1600’s the first organized cemeteries began using slate or sandstone to create inscriptions for the deceased. Slate is a fine-grained, metamorphic rock created by the alteration of shale or mudstone. Sandstone, on the other hand, is a sedimentary rock composed of mostly of quartz sand, but can also me mixed with smaller amounts of feldspar. Both materials were readily available and easy to carve inscriptions into. The use of these stones continued even into the the late 1800’s and very early 1900’s. Eventually the inscriptions on these materials would fade and become illegible due to natural erosion.
Marble. 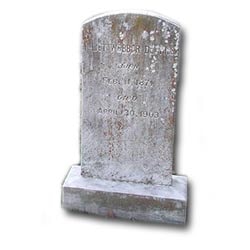 Shortly after the realization that slate and sandstone would not stand the test of time, those who had more wealth were able to purchase marble for their headstones. Marble is a recrystallized form of limestone and is much more durable. Over time as cemetery management increased, marble became the industry standard up through early nineteenth century. The mild acid in rainwater can slowly dissolve marble and limestone over a longer length of time making inscriptions unreadable, but the rate of decay is much longer than that of slate. Marble is still available to use today but is not very common except for preserving/ duplicating older tombstones and veteran markers. 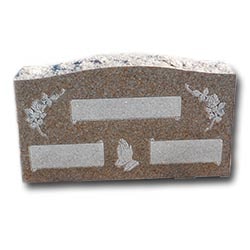 Granite.
Granite headstones became very popular in the late 1800’s and due to modern mining techniques and is by far the best material used in lasting monuments and headstones. Granite is an igneous rock made up of quartz, feldspar, with other small minerals mixed in and is the most common material used in memorials and headstones today. It is formed by slowly cooling magma which is unearthed during shifts in the earth’s crust. Granite is a very hard stone and requires expert skill to carve by hand. Large granite quarries mine and cut these huge stones piece by piece into a manageable and usable product. Modern methods of carving include diamond tipped power tools, computer-controlled rotary bits or saw blades, and regulated sandblasting. Once the basic monument shapes and carvings are completed, the sandblaster can create virtually any kind of artwork or epitaph by shooting high powered flecks of sand through a rubber stencil fixed to the surface of the stone.
Bronze.
Bronze grave markers (headstones) are made from the alloy bronze which is composed of copper and tin. They are available with an assortment of designs and lettering. Bronze markers are available from the Veteran’s Administration for any veteran at no charge. These are not typically used as a stand alone piece but are normally mounted to a foundation, existing monument, or large fieldstone.

Whatever type of headstone you choose, make it specific for your needs and taste. The options are varied and multifaceted. It will be a lasting gift to your loved one and a standing memorial to mark your legacy for generations to come.

Did you enjoy this post? If so let us know with a comment or sign-up for our monthly newsletter containing all our recent blog posts, tips, and upcoming events. 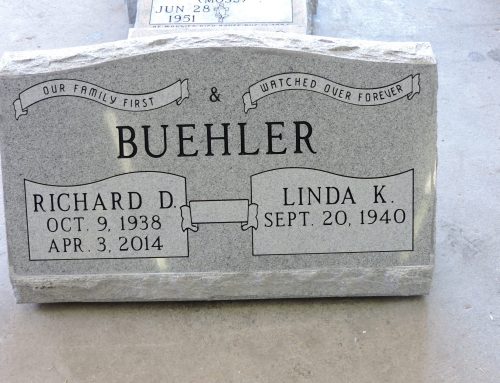 The Importance Of Purchasing A Headstone Memorial Before You Pass Away

May 23rd, 2018
Granite Headstone Colors – Do you know all the colors available?

Granite Headstone Colors – Do you know all the colors available?

January 12th, 2018
Tips For Choosing A Headstone | How To Purchase A Lasting Memorial That Tells A Story